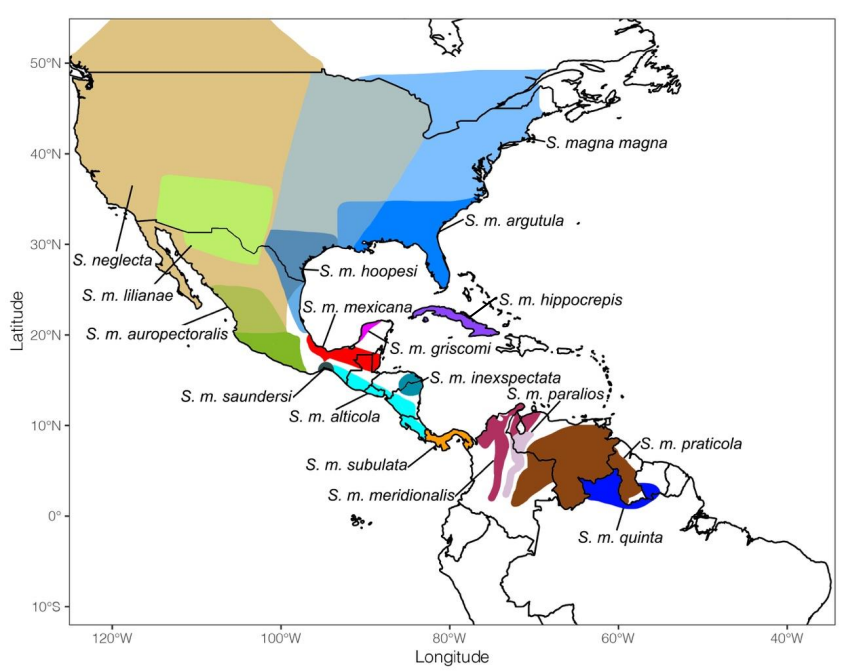 The proposal for this split was written by Johanna Beam, and is based mainly on a paper published in 2021 in Ornithology on which Johanna is the lead author. Johanna grew up birding around Colorado and the research for this paper was done when Johanna was an undergraduate student in Biology at CU Boulder. She is now a PhD student in Biology at Pennsylvania State University. Johanna is a Colorado young woman that all Colorado birders should congratulate and take pride in.

In 2015 Johanna found some Lilian’s race meadowlarks on the north side of McIntosh Lake in northwest Longmont, and submitted record 2015-089 to the Colorado Birds Record Committee. You can read all the Committee records for Eastern Meadowlarks. There are 26 records going back nearly 50 years. At least 3 refer explicitly to the Lilian’s subspecies: 2005-22 from near the old Campo lek in Baca County, 2006-103 from the Colorado City cemetery, and 2015-089 from McIntosh Lake in Longmont. Other records, especially 2003-33 and 2012-47 from south Baca County, may well also refer to the Lilian’s subspecies. This will be determined by the Committee in the near future, so that the new Chihuahuan Meadowlark will be well documented to have occurred in Colorado and added to the Colorado state list.

Wondering if you have seen or heard a Chihuahuan Meadowlark? Nathan Pieplow, author of The Peterson Field Guide to Birds Sounds, says “it’s not uncommon for the three meadowlark species to learn each other’s songs, so song alone is not sufficient to identify them. If you are hearing a bird that sounds like a Chihuahuan Meadowlark, you’ll need recordings of the “dzert” call and/or good photos of the bird (the face and, especially, the spread tail) in order to rule out the other two species.”

Species splits like this one highlights the importance of maintaining and expanding the Colorado Birds Record Committee database of rare and unusual bird sightings in Colorado. If you have any observations (particularly those with photographic or audio recording evidence) of other observations of Eastern Meadowlarks, especially those that may be the Lilian’s subspecies, please submit a report to the Records Committee.

Fundraising results for the COBC are still pending as checks are still being reviewed.*