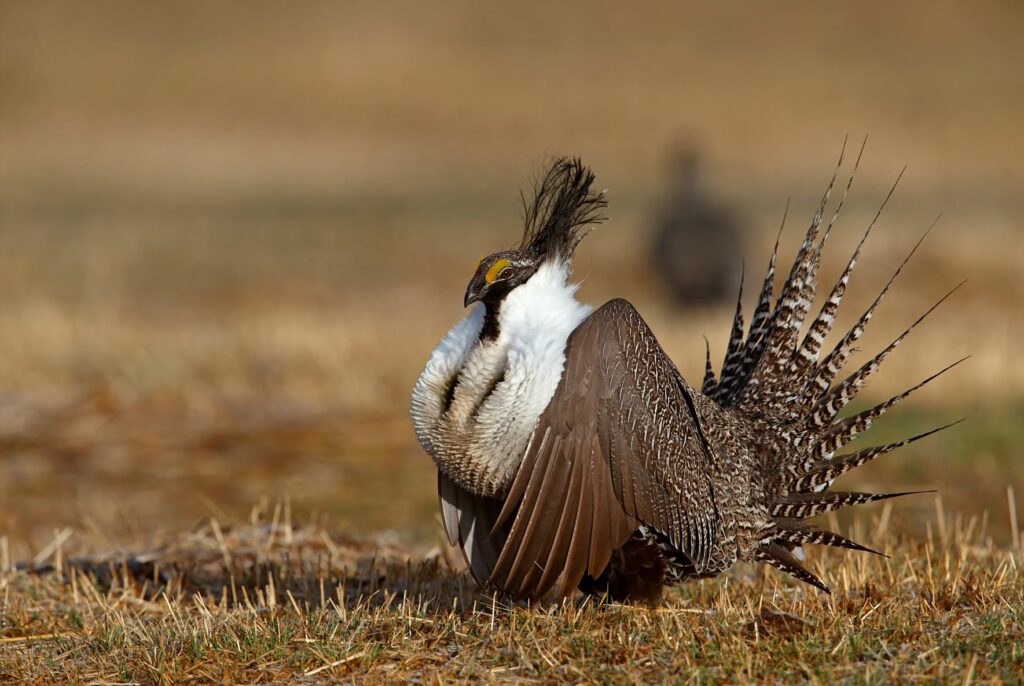 On Friday, July 8th at 3:00 pm Colorado Field Ornithologists (CFO) will present a check for nearly $40,000 to the Gunnison Basin Sagebrush Ecosystem Alliance (GB-SEA.) This presentation will take place at the Red Rocks Amphitheatre Trading Post in Morrison, CO.

This donation was raised from the Colorado birding community earlier this year through CFO’s Colorado Birding Challenge, with the goal of protecting the habitat of the endemic Gunnison Sage-grouse (with an Endangered Species Act listing as threatened) and other sagebrush-dependent birds, from the devastating effects of cheatgrass invasion.

Associate Professor Patrick Magee of Western Colorado University will accept the donation on behalf of the GB-SEA.

This initiative hopes to prevent the disappearance of sagebrush from the Gunnison Basin, and the extinction of one of Colorado’s most iconic bird species. The Gunnison Sage-grouse attracts hundreds of ecotourists to the Gunnison River Valley each spring to view the dancing of the male grouse as they compete for the attention of the females. The population has dwindled to just a few thousand birds. The invasion of cheatgrass from Asia represents a significant threat to the survival of the grouse.

Patrick Magee acknowledged this donation, stating, “GB-SEA and all our partners in Gunnison Sage-grouse conservation are so grateful to CFO for selecting the Gunnison Sage-grouse as the recipient of its fundraising effort this year. We are also deeply appreciative of all the birders and the donors who contributed to the Colorado Birding Challenge. This unique and beautiful species has a tiny global range, a small population (less than 3,000 individuals in the world), and numerous threats (habitat loss and degradation, invasive species, human disturbances, climate change, drought….) to its population and habitat that make it especially vulnerable to extinction. The funding from CFO will add value to our recovery efforts, especially as we try to stop the growing threat of cheatgrass invasion in the Gunnison Basin.”

He added, “Cheatgrass is a non-native invasive species that produces thousands of seeds per plant that reside in the soil waiting to germinate. The grass is named because the seeds “cheat” their way around the ecosystem by hitching rides on the socks and legs of mammals that disperse the seeds deeper into the sagebrush often along trail systems. Once established, cheatgrass growing between sagebrush plants builds up fuel for wildfires that burn the sagebrush and regenerate thicker stands of cheatgrass – it’s a coup that will overthrow the Gunnison Sage-grouse’s 850,000-year reign in the sagebrush.”

GB-SEA will use the funds to coordinate the complex network of property owners and state and federal agencies working together to fight the cheatgrass invasion in the Gunnison Basin.

Compelled by the serious threat of cheatgrass, community members, university scientists and natural resource agency employees have come together to form an active coalition. GB-SEA’s goal is to educate practitioners and the public on necessary and imperative actions the community can take in combating cheatgrass including sharing Integrated Pest Management (IPM) best practices, facilitating seminars and workshops, and coordinating restoration efforts. Comprised of individuals from diverse backgrounds, this group aims to delineate the most effective practices to prevent cheatgrass expansion in the Gunnison Basin.