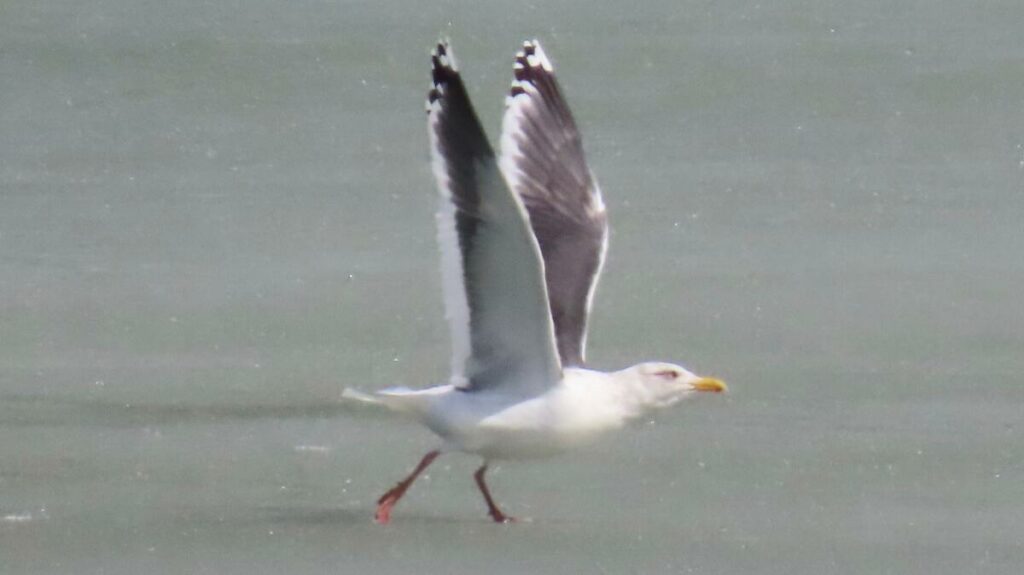 On Saturday, March 26, 2022, CFO jointly sponsored a field trip with Denver Field Ornithologists to search for an adult Slaty-backed Gull that had been found earlier in the week at Boyd Lake, Larimer County, by Josh Bruening. This rare gull had been found on Sunday, March 20, but was not very cooperative for observers, spending little time in one location and constantly moving around the various lakes of Larimer County. On the morning of Thursday, March 24, it was observed for 4 hrs at Kyger Reservoir, near Windsor, Colorado. With the hopes that it would return to that location on other days, CFO and DFO joined forces to quickly organize a field trip for Saturday, March 26, thinking that the bird may not yet be ready to return to its migration path toward Siberia.

So at 1 PM on Saturday afternoon, 30 trip participants gathered at Kyger Reservoir. The gull was not present but trip leaders Nick Komar and Chris Gilbert entertained observers by reviewing gull identification tips and studying the 6 or 7 species of gulls that were present. Meanwhile, a team of six spotters, organized by Sue Riffe, spread out to the many other gull destinations in Larimer and Weld counties to find the special bird. At 3:30 PM the phone rang. One of the spotters, Joe Kipper, had discovered the Slaty-backed Gull lounging with other gulls five miles away at Horseshoe Lake near Loveland, Colorado. The wild gull chase was on. Soon over 50 observers gathered to appreciate this large charcoal-backed gull with bright pink legs. At first the gull was sleeping in the distance among a flock with hundreds of California Gulls. However, it eventually flew towards the horde of observers and bathed near the shoreline, offering excellent views and great comparisons with other dark-backed gulls such as Lesser Black-backed Gull.

Slaty-backed Gull has been documented in Colorado less than five times, with the first being discovered also at Horseshoe Lake in March 2000. Could this be the same bird? Who knows.

We were thrilled that so many Colorado birders were able to experience this rare Asian gull in our own backyard.